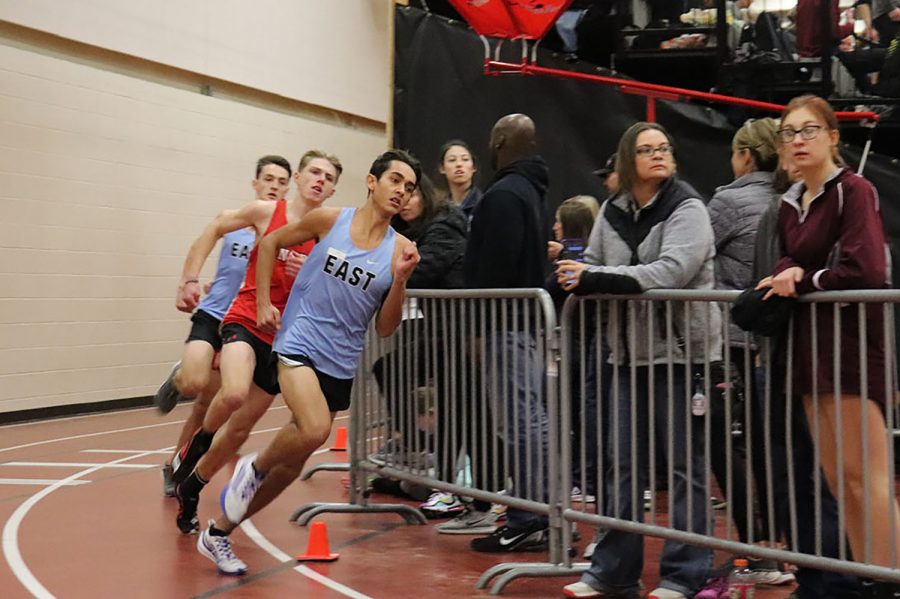 To most, track is a challenging sport, full of opportunities, and a chance to face off against the best competition. For East High’s indoor track team, it’s a lifestyle and about committing yourself to one goal – excellence. These gifted athletes love what they do and put everything into being the best.

For junior Kaliff Guevara, this is just the case. He was so committed to his goal this year, he was willing to sacrifice his other favorite sport to go for the gold.

“I’ve always loved to run and jump, so I really like track,” says Kaliff. “I even decided to quit basketball to do indoor, and it was one of the best decisions I’ve ever made.”

His clear passion for the sport shines through in the results. In fact, at the state indoor track meet in Gillette, he showed off his effort, worked through the nerves and mental blocks, to earn a championship in the triple jump.

“I was nervous going into state because I knew that anything could happen, but afterwards I felt very confident,” he said. “I was leading the triple jump marks by almost two feet!”

Working hard for such a long time finally paid off for him and he will never forget it. Most people recognize a champion only when he steps up the podium, but a true champion has become a champion long before winning a medal. A serious athlete must train hard for years, control his diet, and be willing to spend hours and hours to prepare for the contests. While other people can live whatever way they want, a champion must live a disciplined life. Most people only see him in the glorious moment, but it was the little things that took him to the podium.

Senior Amira Cummings was also a big point earner for the Thunderbirds at State. She placed second in the 55-meter dash, third in pole vault, and eighth in the sprint medley relay. Amira has spent the better part of her high school career becoming one of the state’s best pole vaulters, and she isn’t afraid to shine at a few other events as well.

“My favorite event is pole vault because I used to be a gymnast,” Amira said. “I love to fly in the air.”

Amira’s favorite parts of her sport and season are the bonds she has made with her teammates, her coaches, and even her opponents. The state meet was especially emotional for her, as it was her last high school indoor track meet.

“My favorite part about state was actually being able to say my final goodbyes to my teammates,” she says sadly. “I’ve made so many friendships throughout the years.”

Cummings signed her national letter of intent in mid-January to run track at Concordia College in Nebraska. At the end of the 2020 season, she was named all-state for indoor pole vault and indoor 55 meter. She was also named all-conference for the 100 meter and sprint medley.

While this state meet was a physical win for these athletes, for others it was an emotional one. Freshman Mikaila Trujillo felt extremely lucky to be on a team like East High’s, and she is very grateful to have met the people she did. She also learned new techniques and became a better athlete.

“My favorite part about being on the indoor track team was the constant support from everyone and constantly being pushed to be a better athlete.” Mikaila says. “I’ve also loved getting to know the seniors and having someone lead me through my freshman year.”

For all indoor track athletes, the end of the season was an emotional and amazing time. East High’s entire indoor team made strides to improve times and distances. While the team says good-bye to a great group of seniors, there’s still plenty of promise from Thunderbird Nation track.